Plans for a new state-of-the-art fire station and training facility have been given the green light on land to the west of Ponteland High School, on the B6323 Callerton Lane.

Unanimously approved by the Strategic Planning Committee last night, the move will see the progression of development for the new Fire Station and the already approved School and Leisure development to the north.

The application, which considered the appropriateness of the development on the Green Belt as well as the impact upon local residential amenity and ecology, covers the construction of a single-storey, seven-metre-high fire station, a 14-metre-high training tower, a drill yard to the rear of the site, and parking for up to 13 cars.

Issues around Green Belt impact were considered acceptable and comments were made in support of the contemporary design, which was seen as in keeping with the development of the school and leisure centre.

The existing fire station is being demolished as part of wider plans to free-up land for a new £42m leisure and learning facility in Ponteland.

Building the 1,358 sq. m fire station could create several new construction jobs with more to follow as the scope of development work in the Callerton Lane area unfolds over the next few years.

Despite some minimal objection to the new fire station, the approved proposal has shown that there would be an acceptable loss of trees and hedging which would be alleviated by a landscaping scheme and that the design of the site would not have an adverse impact upon the street scene of Callerton Lane or the safety of the surrounding road network.

He said: “This is an important planning approval, which will now help to pave the way forward for wider development of the area and allay local concerns about the future provision of fire and rescue services in Ponteland.”

Ryton based architect GRADONARCHITECTURE has developed the design for the new fire station, working in close cooperation with the council officials and planning experts. 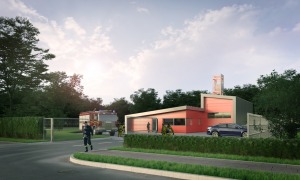